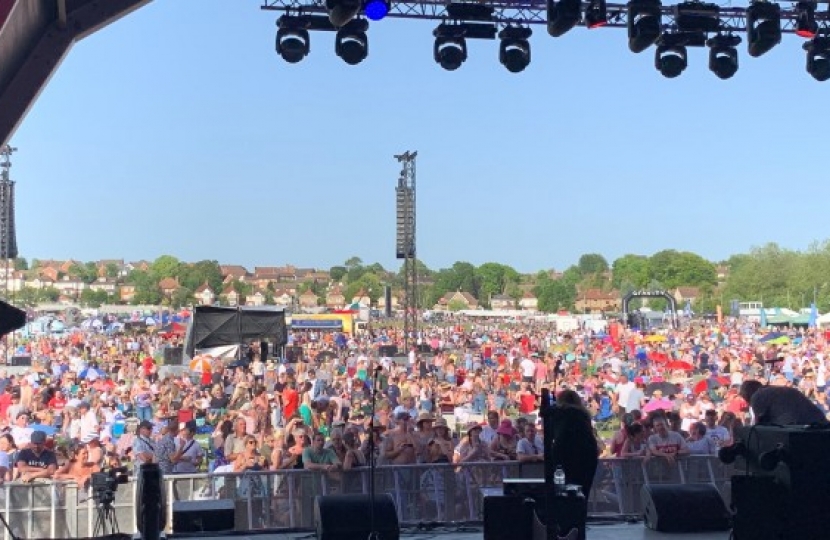 The city honoured the country's Armed Forces in style with thousands showing their support for the military both in the city centre and at Hudson's Field. It was a weekend packed with highlights including flypasts by the Royal Air Force Red Arrows, the iconic aircraft of the Battle of Britain Memorial Flight, rousing sets by the The Feeling, Kaiser Chiefs and Björn Again, parachute displays, military displays, live music on the BBC Wiltshire stage and a hot air balloon lift off.

Baroness Scott of Bybrook OBE, leader of Conservative led Wiltshire Council, said: "This has been the most fantastic three days honouring our Armed Forces. Thank you to everyone who has been with us over the weekend, it has been something we will remember for years to come. Wow, what a wonderful weekend it has been!"

More than 15,000 pints were sold by Wadworth with 5p from every pint being donated to SSAFA, the official main charity partner of the event.

Around 13,000 thousand people lined the streets of the city centre on Saturday morning on national Armed Forces Day for a military parade with more than 1,300 military personnel.

HRH The Princess Royal took the salute outside the Guildhall as the Royal Air Force Red Arrows performed an iconic flypast in tribute to the troops. The Princess Royal then visited Hudson's Field where she toured the military village and was presented with by the granddaughter of Baroness Scott of Bybrook, OBE, leader of Conservative led Wiltshire Council. She was accompanied by David Lidington, Duchy of Lancaster, and Defence Secretary Penny Mourdant.

On Saturday afternoon Salisbury handed the baton to Scarborough who will be hosting the national event for Armed Forces Day 2020 with Baroness Scott presenting Cllr Steve Siddons, leader of Scarborough District Council, with an armed forces day flag.

The crowd continued to grow during the afternoon and peaked at 27,000 ahead of the evening's live music from Shine for Salisbury winners The Treblemakers, The Upbeat Beatles and headliners Kaiser Chiefs, which was hosted by platinum sponsor Lovell.

The three-day spectacular began on Friday with around 8,000 people enjoying a day of displays, demonstrations, live music and activities at Hudson's Field.

Serving military personnel and their families were the special guests for the afternoon and evening with free food and drink as a thank you for the valuable role they play in protecting the nation.

Shine for Salisbury winners Duck n Cuvver got the evening's live music, hosted by platinum sponsor KBR Aspire Defence, off to a rocking star before headliners The Feeling wowed the crowd.

The celebrations continued on Sunday at Hudson's Field where the focus was on veterans and cadets, those who have served and those who may serve. The Royal Air Force Red Arrows got the day off to a rousing start with a flypast over the showground. Later on Sunday a lone Spitfire flew over Hudson's Field where a drumhead service, led by the Bishop of Salisbury, was held in honour of our armed forces.

This year's national event was brought to a close with the hits of ABBA performed by the renowned performers Björn Again. Colonel Andrew Dawes, Commander South West, presented Baroness Scott with the artillery casing of the shell that had been used earlier than morning to announce the start of the military parade, as a memento of the event and to thank her for the support she has given the military in Wiltshire.