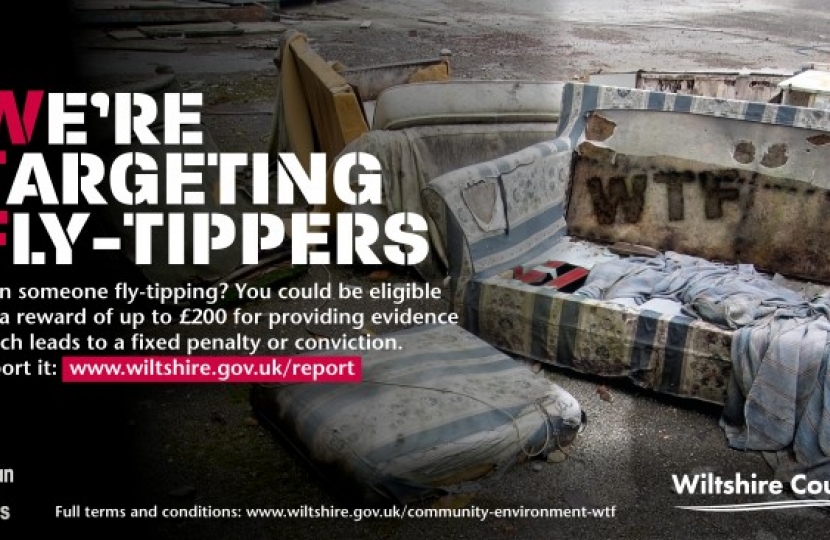 Conservative led Wiltshire Council has launched a reward campaign to reduce fly-tipping throughout the county.

The 'We're Targeting Fly-tippers' campaign aims combat the scourge of fly-tipping by offering residents a reward of up to £200 in high street vouchers if they report information that leads to the successful prosecution of an offender or the payment of a Fixed Penalty Notice (FPN).

Conservative Cllr Bridget Wayman, Cabinet Member for Highways, Transport and Waste, said: "We're delighted to launch this campaign to reduce fly-tipping throughout Wiltshire and reward our residents for helping us to fight this blight on our beautiful county.

"Fly-tipping costs us more than £180,000 each year, it is unsightly and it is a danger to people, wildlife and the environment. So we need the help of our communities to prosecute fly-tippers and keep our county cleaner, greener and safer.

"I would urge anyone with any information about fly-tipping in Wiltshire to report it to us with as much information as possible, and any successful prosecution or payment of a Fixed Penalty Notice will earn a voucher of up to £200 for the person who reported it.

"However, while we want residents to provide evidence as possible, it's hugely important that people do not try to rummage through or disturb the waste, as this could affect the scene and put people in danger.

"It is also essential that people do not attempt to confront anyone who is fly-tipping or put themselves in danger in any way. We want to reduce fly-tipping, but public safety is our main concern.

In Wiltshire, most fly-tip reports are of a commercial nature, where waste is cleared for a fee and then dumped to avoid lawful disposal costs. Penalties for offenders include an unlimited fine and/or five years' imprisonment; a £50,000 fine and/or 12 months' imprisonment; a Fixed Penalty Notice of £400 if they are caught fly-tipping small scale waste.

To report fly-tipping in Wiltshire, or to find out more about the campaign, including terms and conditions, see this page.